Celebrate a Bite of Fruit Ninja in Every Game

Play any of our games below this month for juicy surprises.

Watch the creators of Fruit Ninja discuss the game's development in a revealing behind-the-scenes documentary.

Did you know that more than 1 BILLION people have played Fruit Ninja?
Click the graphics below to put that number into perspective!

The History of Fruit Ninja

We look back at 5 years of Fruit Ninja, from simple idea to world domination!

An Idea is Born

This is the original concept shot for Fruit Ninja. This is literally the very first piece of Fruit Ninja imagery ever created.

Luke Muscat, creator of Fruit Ninja, says the game was inspired by a late night infomercial for kitchen knives.

One month and four people. That's all it took to turn a simple idea into one of the most popular mobile games of all-time. If only it was that simple...

There was a lot riding on Fruit Ninja's success. Halfbrick's back was against the wall and it was essentially do or die for the studio. There's no telling what would've happened without it.
Rinal Deo, Halfbrick CFO

Fruit Ninja was released for iPhone on April 20th. A few months later, it made its way to iPad, Android, and Windows Phone.

Touchscreens were still novel in 2010 and nothing felt quite as satisfying or natural as slicing fruit with your fingers. This was only the beginning.

No Time to Celebrate

Fruit Ninja's overnight success took the entire studio by surprise, but there was no time to rest on our laurels.

Fruit Ninja had its first update less than one week after launch, introducing new fruit, a high score marker, and the ability to slice more than one fruit at a time. It was the first of many.

The game is good, but how can we make it better?

This is the question that guided the Fruit Ninja team as they continued work on the game after release. There was plenty of room for improvement, and the team knew it.

People forget how basic the original version of Fruit Ninja really was. There was one blade, one background, and one game mode. It didn't even have combos! There's no way we'd get away with that in today's market.
James Schultz, Community Coordinator

No bombs, no lives - just fruit! Zen Mode was created in direct response to player feedback. It was simple, accessible, and a great alternative to the pressures of Classic Mode.

November, 2010 saw the addition of Arcade Mode, a faster and more intense take on the Fruit Ninja experience.

It was a huge hit with fans, introducing over-the-top power-ups, blitzes, and a more forgiving life system.

It took us longer to make Arcade Mode than the base game and all previous updates combined. Balancing the different power-ups was harder than it sounds, but the extra attention to detail was definitely worth it.
Stephen Last, original programmer

This photo was taken to celebrate 1 million sales of Fruit Ninja. Many of the people you see here are still at Halfbrick today!

By the end of 2010, the game was going strong with over 4 million downloads and glowing reviews. But the party was just getting started...

Arcade Fans get their F(i)X

Fruit Ninja FX brought a blast of excitement to the arcade world with juicy fruit slicing action for 1-3 players. The arcade units, created by Adrenaline Amusements, are available to play in arcades across US and Europe.

The pomegranate blasted its way into Classic and Arcade mode in June, allowing players to get even higher scores with its multi-slice madness and explosive capabilities. At the time, it was described as the "biggest and baddest fruit we've ever added."

In August, Fruit Ninja Kinect made a splash on the Xbox 360. Kinect's motion tracking took fruit slicing to a whole new level of immersion. YOU became the ninja.

The game went on to win Casual Game of the Year at the 15th Annual Interactive Achievement Awards and was in the Top 10 best-selling Xbox Live Arcade games of all time.

As a tie-in to the Puss In Boots movie, this standalone game featured Bandito mode, a series of mini-games, along with our #1 most requested addition – the tomato!

Fruit Ninja Frenzy was released exclusively on Facebook in late 2011. It featured a ton of cool new content, including Fruit Smoothies, a daily prize wheel and challenging your friends through Facebook.

"The Facebook game is kind of what you play when your boss isn't looking, but the iPhone version you play on the train home."
Duncan Curtis, producer

In May 2012, Fruit Ninja had been downloaded over 300 million times and was on 1 in every 3 iPhones in America.

To celebrate the 2 Year Anniversary of Fruit Ninja, the game got a major update with starfruit and new power-ups: bomb deflects, berry blasts, and peachy times. It also saw the introduction of two new characters: the travelling merchant Gutsu and his porky pal Truffles.

Two years on and still going strong, the Fruit Ninja team hit the road to find the best player in Australia. Thousands of people joined in to play Fruit Ninja on our tour of Sydney, Brisbane and Melbourne.

Three champions arose: Tashi Angmo (Sydney), Cong Su (Brisbane) and Jess Nunn (Melbourne). But there could only be one winner. Congratulations, Jess Nunn!

Fruit Ninja teamed up with Skittles in Europe for a promotional mini-game featuring colorful candies and blowfish. Wait, what?

Sensei and Gutsu were joined by a gang of colorful new characters: Katsuro, Mari, Nobu and Han.

The original game also had a major overhaul. Previous cosmetic items - blades and dojos - now had a noticeable, strategic effect on the gameplay, letting you mix and match to discover the best combinations.

Who you gonna call? Ghostbusters!

A new look and feel for the game was closely followed by a spooktacular Ghostbusters tie-in to celebrate the film's 30th anniversary. The free update added ghostly fruit, a new dojo with 'cross the streams' power-up, and the iconic Proton Pack.

Is it harder or easier to play Fruit Ninja in real life? MythBusters ran real fruit and real swords through their paces. Then Jamie kicked things up a notch...

Fruit Ninja Kinect 2 came to Xbox One in March, 2015, kicking off with a global #ninjastyle campaign to honour weird and wonderful play styles from around the world.

We know that kids of all ages love Fruit Ninja but we wanted to help them learn too. Developed by Krome studios, Math Master teaches all the basic math skills through mini-games and a cute cast of characters. It made for some very happy parents.

Think you've seen everything Fruit Ninja has to offer? Think again! There's now a new Festival mode with 6 mini-games which earn you Golden Apples. Use those apples to enter the tournament to challenge the Fruit Ninjas at their own game!

Plus, you can try out the most powerful Fruit Ninja blade yet...

With 1 billion downloads and more sliced fruit than stars in our galaxy, it's been a fun and fruitful five years.

But we're not done yet! Here's a peek of some new characters. Any guess on where they'll appear? 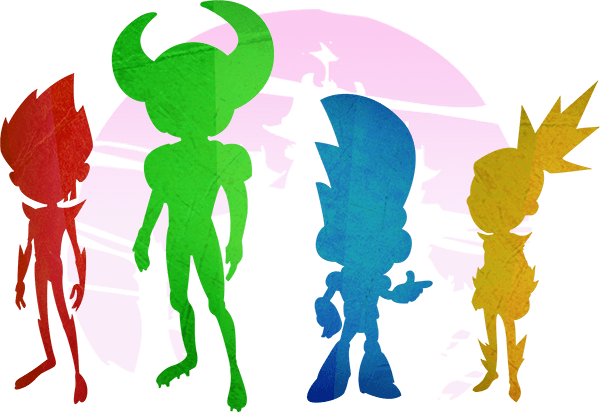 What Do You Love About Fruit Ninja?

Did you teach your cat to play Fruit Ninja? Have you tried being a real life Fruit Ninja? Share your cool stories with the hashtag: